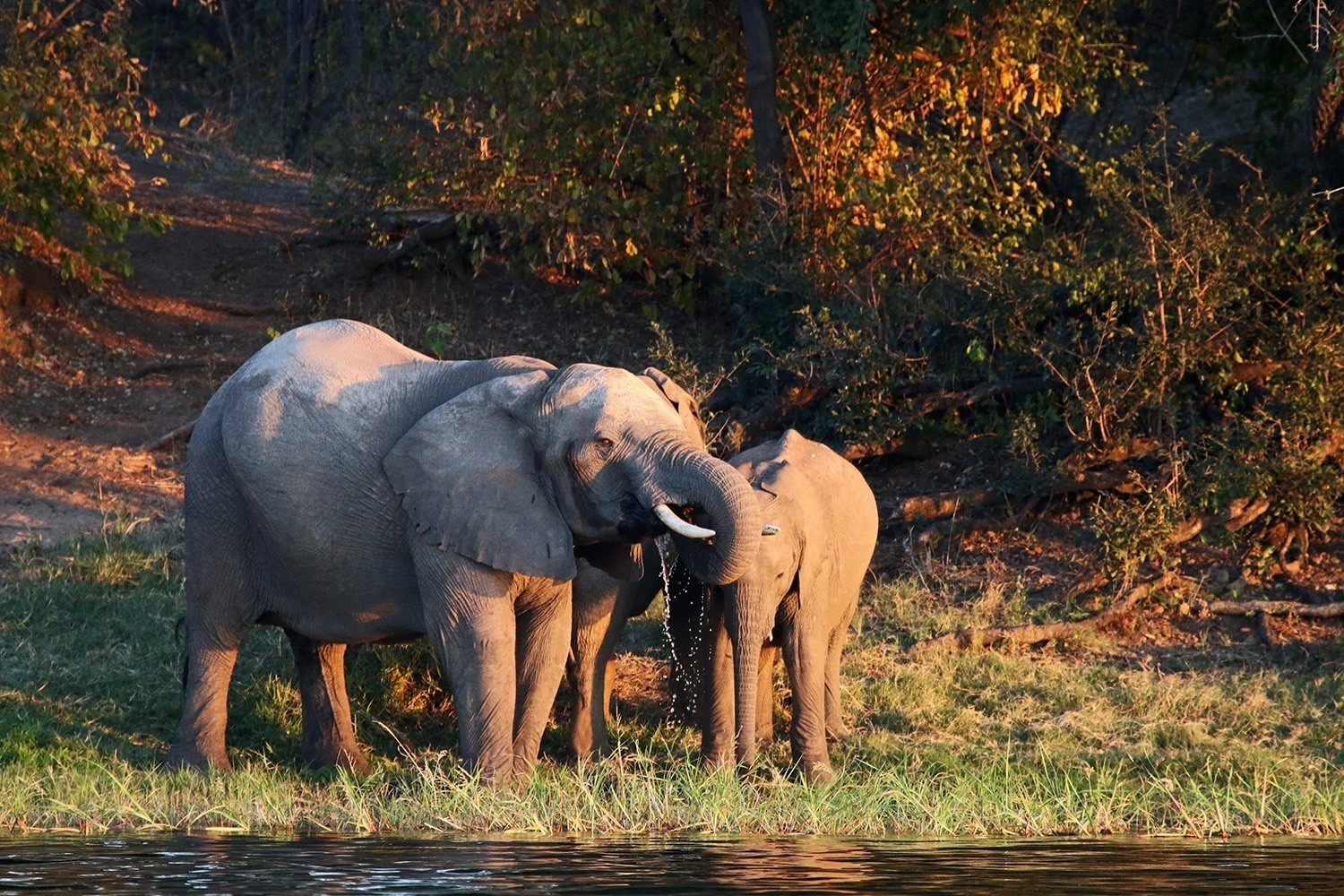 “There is mystery behind that masked gray visage, and ancient life force, delicate and mighty, awesome and enchanted, commanding the silence ordinarily reserved for mountain peaks, great fires, and the sea.”

What was he doing? We pondered. Usually we understood the antics of our river’s animals. Our guides at Royal Chundu grew up on this riverbank; they’ve told us everything they know. Which really is just about everything there is to know. But no one knew the answer to this…

The littlest elephant stood before us on the bank, with his trunk in his mother’s mouth while Mother and the others slurped up water from the perfectly sufficient source flowing below.

We tossed ideas around between us on our sunset cruise. Maybe he’s feeding on regurgitated grass like a baby bird. Perhaps he can’t reach the river and is using his mother’s mouth as a convenient fountain. Little one proved that notion wrong by toddling down to the water’s edge with another young one to show us that he could quite aptly ‘knock it back’ as much as the others…

With its 100,000 different muscles, the elephant’s trunk simply has so many roles that it gets confusing for us human spectators. But perhaps that’s part of the fun, the way of the safarigoer… projecting ourselves into the minds of the wilder beings we encounter, partaking in the guessing game of the African bush and discovering how utterly, embarrassingly incorrect we were.

The elephants of the Zambezi are particularly enigmatic creatures. They aren’t like Africa’s other elephants. They decide whether to let you in or not. They come to you; you don’t seek them out. Like the hippo’s eyes that slip out of the water without warning, metres from your boat, the herd appears suddenly. On our few kilometres of river, there is no one else to interrupt the moment. The elephants are here for us, we tell ourselves.

One by one, the herd trots their bulky trot, from the reserve on the Zimbabwean side, down the bank. Their trunks feel out the scene, waving and groping in a dance of mystery, leaving us to decipher their elephant language for ourselves. To theorise about that trunk…

The truth of this mystery, it would seem, was not one about food or water at all. But one, most likely, about compassion and curiosity. No great purpose, perhaps, but one pivotal to life as an elephant.

According to Eleaid, besides the trunk’s role as nose, arm, hand, voice, straw and hose, it is also an essential tool for social behaviour. Prying it into the mouths of family members is apparently quite natural.

“Virtually all close elephant interaction involves the trunk. They use them to touch, stroke, explore, caress and embrace. A mother will wrap her trunk protectively around her baby, close family members and friends will put the tips of their trunks in each others mouths, juveniles will play by trying to wrap up their friend’s trunk in theirs and potential mates will touch and feel the more private areas of the object of their affection.”

As the sun set over the family on shore, we watched on at the secret life of the Zambezi elephant – our arms (trunks) around each other.

10 Trunk Facts We Wanted You To Know

Source: The experts at Eleaid

1. The trunk is vital for life. The reason a charging elephant tucks his trunk out of harm’s way is to protect it from damage.

2.  A baby elephant uses her trunk to interact with her mother. It takes them a number of years to become expert in their use. It’s amusing to watch the antics of newly born calves as they try to get used to the limb dangling in front of them.

3. Once mastered, the trunk has no equal in the animal kingdom for dexterity, manoeuverability and strength. It can perform even the most delicate functions – from picking up a small coin from a flat surface to lifting 250kg weights.

4. Given that they have the largest nose in the world, elephants are thought to have the best sense of smell of all animals. The tip of their trunks are constantly moving, testing the smells in the air in every direction. They can pick up smells over long distances, giving them a useful early warning system of approaching danger. They often sniff out each other to obtain valuable chemical knowledge about their companions.

5. The trunk is not quite a straw as often thought, as elephants don’t not use it to drink through. They use it to draw water, which they then spray into their mouths. A typical trunk can hold around four litres of water, while the trunk of a big bull can hold up to 10 litres.

6. Elephants use the trunk as a shower with various pressure settings. It can either send a power blast jet of water or offer a more gentle alternative.

7. When elephants are very hot and water is not readily available, they often put their trunks in their mouths, obtain large amounts of saliva and spray it on their bodies.

8. The trunk is also used to chastise, discipline or control in confrontational situations. An elephant will often wave it or hold it in the air as a warning of aggressive intent. The real danger sign is when it rolls the trunk up and tucks it under the chin. This signals that it is preparing to charge.

9. Elephants can use their trunks to produce a range of sounds, from a low snort to high pitched squeaks of excitement or a deafening full blown trumpet. They also use them to make as a particular warning sound, by rapping their trunks on the ground to create a resonating rumble – a sound often used by mothers when concerned by threats to their young.

10. The tip of the trunk is the most sensitive tissue ever studied. It is packed with nerve endings and distinguishes the African variety from the Asian. the African sports two fingers allowing it to grasp an object with between its fingers, while the Asian has only only and tends to scoop more and hold objects against the underside of the trunk.

In the Garden of Togetherness

5 Places to Practice the Art of Staring out of Windows